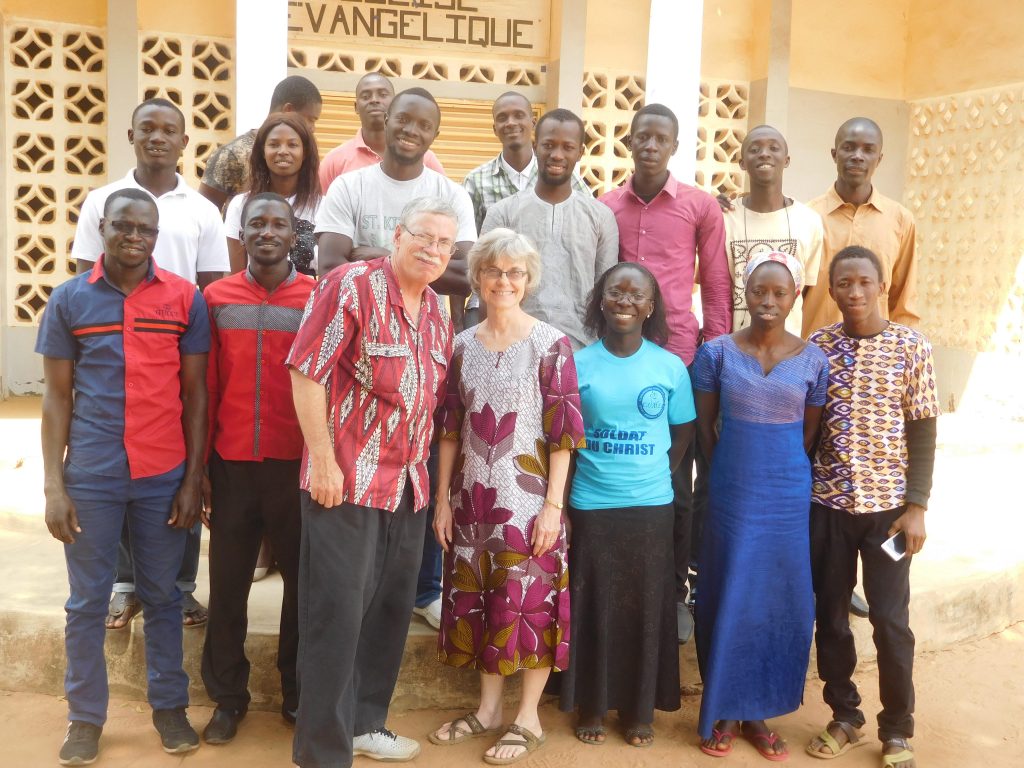 I’m 31 years old. Like most millennials these days I feel incredibly old. I spend much of my life talking about back pain, knee pain, and my impending retirement. I wear a beard, but like most it isn’t out of style concerns but rather out of general laziness. I’m so old that I no longer give an ounce of thought to what the kids think about my style. It’s just a matter of time before you see me walking around town with mustard slopped across my t-shirt and socks with my sandals. Life is basically over. When I think about my life I think back on all the things I could have done, and how if only things would have played out a little differently maybe I could have been a rich man or an actor or maybe even a famous athlete, but now I know that it’s too late to change. My fate is sealed and my time on Earth is limited now so I shouldn’t start too many big projects.

Imagine my surprise then when I met two people who had not only lived past 40, but they had spent 28 years living out the gospel in Western Africa. After applying a little bit of complex calculus it became apparent that they must have gone to the mission field at five years old. Otherwise they would already be dead of old age. Then I found out that they hadn’t even gone into the mission field until their mid-twenties! What kind of a God would call an elderly couple into Africa? It simply couldn’t be true. I needed to investigate a little deeper.

Turns out Charley and Sherry Campbell knew they were headed for the mission field at young ages. They had both spent times abroad doing mission work and knew that they were being called outside of the United States. Charley believed he had been called to Africa, and you can imagine his delight when he met a young lady in Sherry who knew her life was leading her to another country but didn’t know where she was headed. This was a match made for heaven. Sherry’s job was taking her to the beautiful land of Colorado and Charley would oblige in following her as long as he knew that the eventual goal was to get back to Africa. Sherry began taking French classes during that time in order to build up her resume for living abroad.

A ton of administrative work goes into getting from your home into the field as a missionary, and one of the greatest challenges is picking a good mission organization. In general terms mission organizations do a ton of administrative work for their missionaries by helping with things like the accounting and financial aspects all the way to supporting the missionary with visa paperwork and dealing with all the legal details of being in another country. They all operate a little differently but picking the right fit for a missionary can help determine if that missionary has long term success in the field or not. Although the company was under a different banner at that time, Charley and Sherry chose World Venture, which has been an excellent fit for them. However, it does require missionaries to raise their own support.

On top of the funding said missionaries must also design their mission and figure out what they intend to do and how they intend to do that work. Charley was bent on teaching at the time and focused his life on Old Testament theology and training. He teaches local pastors in rural West Africa good theology and encourages those leaders by educating them to return to their own villages and spread the word of Christ through sound biblical teaching. Along the way they would find themselves with an opening in Cote D’Ivoire teaching at a local mission school. It didn’t take long for Charley and Sherry to fall in love with the Ivory Coast. However, God would have different plans.

In 2002 unrest started to develop within the political climate of the Ivory Coast, and rebel forces began seizing control of the country from the middle and moving outward. The conflict reached all the way to Charley and Sherry’s town. Charley will tell you of being able to hear gunfire and smelling gunpowder wafting within their screen doors. Sherry remembers that they had just sent their oldest child to a mission school a couple of hours away. The panic of trying to get the family back together and figure out what was needed for their safety could be enough to overwhelm anyone, but God was good and through their mission organization orchestrated a safe evacuation from the country.

Charley and Sherry loved the Ivory Coast and thought that in 2004 it would be safe to return to their village and start the mission school back up again. They felt God was calling them to go, and in doing so would inspire other missionaries with families to also go back. However, God emphatically shut the door on Ivory Coast becoming their permanent residence when military conflict broke out again. This time they can recall a time when a library just a couple miles away was bombed by rebel military fighter bombers killing nine French Peacekeepers. It became clear that the country wasn’t safe enough for them to be there, and through the guidance of their organization’s leader who said to them, “Dead missionaries aren’t effective missionaries.” Shortly thereafter they would find their way to Senegal.

Senegal is a very different culture from the Ivory Coast, and this time the conflict that would threaten Charley and Sherry’s mission was in their own hearts. This wasn’t what they originally had in mind. They were small town people and didn’t like the city, but they had now been placed in a metropolitan area. The spiritual culture is completely different as well and took some time to reacclimate. In the Cote D’Ivoire, the spiritual thinking is largely based in animism where all objects, plants, and animals have a soul and is worthy of either worship or caution. However, in Senegal 96% of the population is Muslim with only about 1 of every 400 people being an Evangelical Christian. To say that the Campbells are the minority is a bit of an understatement in Senegal. However, this also showed them that God’s need was greater for them in this country. 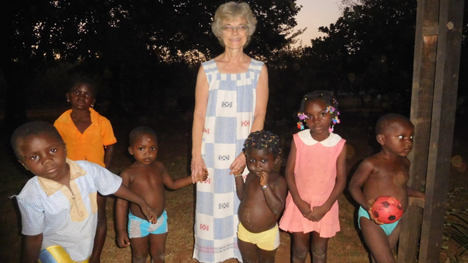 They have spent the last fifteen years of their lives working in Senegal discipling local Christian leaders through certified theological education. There are undergraduate courses all the way through master’s level courses that provide students with modules to help local pastors develop strong theological formation. They have also become ingrained in the community sharing in fellowship with Muslim neighbors by being friends and loving neighbors. Though not of the belief that they should be overly pushy or argumentative, they see being friends with those around them and helping those around them as great opportunities to eventually share the gospel with people as they start to ask.

Life between Christians and Muslims in Senegal, as it is in much of the world, is quite peaceful, but that doesn’t mean it’s easy to become a Christian. In a culture where 96% of people are Muslim the culture is completely predicated upon that faith. When someone decides to follow Christ, they must give up huge parts of their lives such as family, friends, and jobs. It’s not a decision that can be taken lightly by someone of that background, so Charley and Sherry have learned that the best approach is to offer the gospel when asked for and provide comfort and help to those that do make the transition into the Christian walk.

Sherry has even developed a study with a local group of ladies to help them understand how to grow their own faith. Many of these women are illiterate making simply reading the Bible and taking part in studies quite difficult. In Senegal nearly 60% of the adult population is illiterate and of those, two-thirds of that population are women. However, the passion for Christ in these women that make the choice to live for Christ is unquestioned. Many will walk long distances just to be a part of this group. One of the members of the study even walks nearly seven miles just to partake in fellowship and education of her faith. 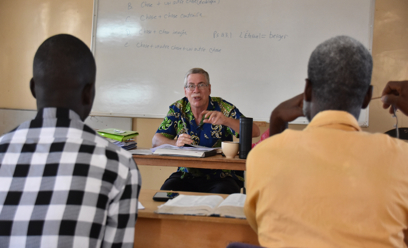 I think one of the stories that best illustrates Charley’s passion as a teacher for sound theological formation through biblical training is when one of his students returned to him and told him of his reaction to being taught how to read the Old Testament for the first time. The young man had cried when he first understood, through Charley’s guidance, how to read the old testament and how it related to Christ. When he understood that God’s story was apparent in the Old Testament and that his redemption plan for humanity was built all throughout human history, he couldn’t help but shed a few tears. It’s truly a gift because often we think that the Old Testament is just a bunch of books that are meant to rob our joy. However, as Christ says in Matthew 5:17 “Do not think that I have come to abolish the law or the Prophets, I have not come to abolish them but to fulfill them.” The Old Testament is God’s story taking shape and eventually culminating in Christ releasing our bonds from the law. Though the law should still be obeyed, its purpose is to continually point towards humanities need for Christ.

When I got to talk to Charley and Sherry, I found myself oddly comfortable around them. After all what could I have in common with people that had spent almost my entire lifetime serving Christ in a foreign country? We come from different times, and we live in different cultures, yet we share so much in common. They were just people following Christ’s calling. They raised two children, shopped, cooked, cleaned, and did all the other parts of life that are similar to my own. However, they found a calling that God had for them and they took the opportunity to leap for Him. We all have these opportunities in our lives. Maybe they aren’t as dramatic as setting sail for a foreign coast, but He has work for all of us. Some of us are called to be missionaries, others may never have that calling but perhaps have the gift of support or prayer. God’s people need fellowship and relationship in order to be strong. Remember that Solomon said “Two are better than one… A cord of three strands is not easily broken.” (Ecclesiastes 4) Please consider supporting Charley and Sherry with fellowship by reaching out to them and connecting with them, praying for their difficult times in strange cultures, and of course financially if God puts that on your heart. Also, check out the podcast through Grace Church’s website which gives a great deal more detail about their work and provides a ton of interesting and thought-provoking conversation about their life.

Charley and Sherry can be reached via email at charleyites@gmail.com. You can also give to them financially online at give.worldventure.com. You can give to them directly using the number 095 or their rural pastor training under 6403-962. You can also send a check made out to World Venture and mail it to 20 Inverness Place East Englewood, CO 80112. Put their number in the memo line as well as a note that the check is intended for Charley and Sherry Campbell serving in Senegal. 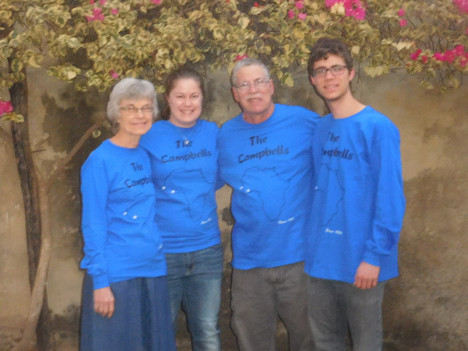